Chris and Nini treated us to an evening meal on Father’s Day two days after we arrived back in Glasgow from Greece. As usual, we met at The Counting House on George Square and then went to Di Maggio’s in Royal Exchange Square passing the statue of the Duke of Wellington on the way. It’s the one that has the traffic cone, almost permanently now; the one in front of the Gallery of Modern Art – the building that used to be Stirling’s Library when I was younger, a haven for me.

The cake celebrations were Bob’s, Nimitta’s, Nini’s (2), Harleen’s and Harveen’s. The barbecue was at 3BC, my house, with Hardip and Mandeep presiding over the food. The wedding was Jazz and Julie’s at the new gurdwara in Pollokshields, where there were six Bhachoo cousins of Hardip but no Devsis. I had to leave early because of Nini’s birthday lunch, but it was good to see enveryone.

Bob and I visited Mum Stickland in Dorset. 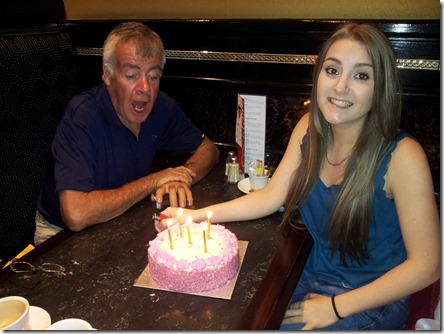 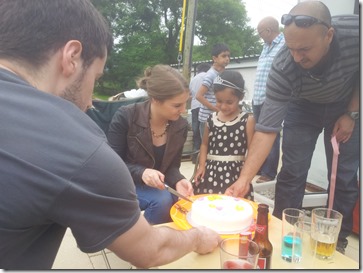