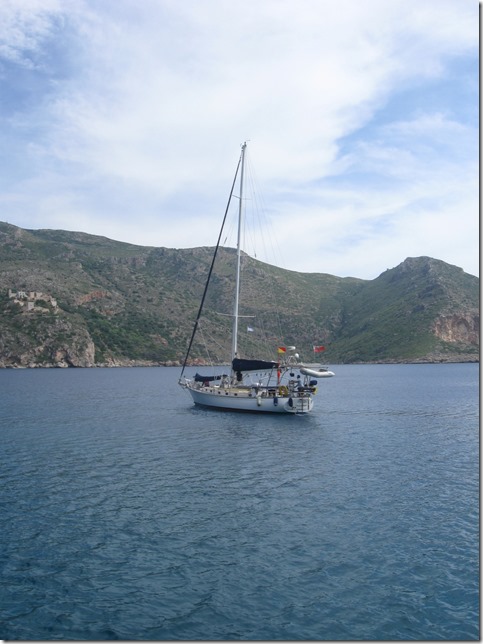 We left Porto Kaiyo trying to exchange contact details with Conny and Claudio over the bows of our boats. As we left the bay, Bob called them on the VHF and wrote down their e-mail address which was difficult as it is not a straight forward one. It began with Sinai which may be a word of special significance to them but it does not give much of a clue to someone hearing it from them for the first time- why Sinai? Perhaps it was where they had met. We had taken pictures of their boat sailing and they had ones of Peperuka to exchange. I sent the best one. And above is one they sent us.

We sailed for a few nautical miles before the wind began to pick up whereupon we prepared our life jackets,labelled Peperuka 1 and 2, fitting them to their respective harnesses with clipping belts. Before we reached Dhaikofti the wind was strong, the seas confused and I was feeling seasick. Unusual for me.

The bay has a ferry terminal and a breakwater but, depending on the wind, it is possible to set a safe anchor in front of the little town. At first I couldn’t move the anchor, but following several kicks from different angles it did slide off the bow. Bob was in no position to help as it was taking all his skill to hold the boat from being blown into danger by the catabatic gusts speeding down the hill. The anchor slid into the water, I could see the sand at the bottom, and it bit hard as the gusts pushed the boat from side to side. I was sure the anchor would be pulled up but Bob said he was pleased when it had bit with such force.

I managed to boil potatoes for our meal but then I began vomiting. Bob remembered that we had motion sickness tablets which I produced from the first aid box. All the information was in Greek except for ‘take these with the advice of your doctor’. I took one and slept for an hour while Bob opened a tin of tuna and ate it with the potatoes.

Later, when the wind changed, we were afraid the boat would be pulled nearer the beach and grounded. We decided to take turns on anchor watch, but Bob just kept getting out of bed. I was going out every fifteen minutes to check the position of the boat in relation to the breakwater, the restaurant on the shore and the points on the hill where I had watched as Peperuka veered to the left and right with the wind. In the end we both stayed up and both slept. At about two o’clock the wind changed direction and we slept in our waterproofs ready to move if there was any danger to Peperuka. She stayed safe and we left Dhaikofti at first light.