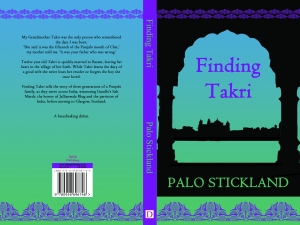 My publisher asked, when we’d finished editing, if I was excited but that didn’t happen until my copies were delivered. I had two friends with me on the day the books arrived and we looked at them with genuine delight. I had made a list of everyone I wanted to gift a copy to, and those two friends left with sixteen copies (mainly for a book club). The next day my Befrienders group took twenty-four and this continued for the month of August 2013. It was a great month and I gifted one hundred and fifty-eight copies. The furthest places in the world that copies went, from Scotland, were Shillong near Assam, India, to the east and Reno, Nevada to the west. To the north, the Orkney Isles and to the south, Paris, France. Not bad in a short space of time.

So, what’s it about? Takri is the name of my maternal grandmother, Basant is my grandfather but the third hero of the story, Karam, is entirely fictional. There is a thread of truth running through the narrative but the novel is mainly a work of fiction.

The feedback has been very good and I feel an enormous sense of achievement in a task completed and well received. I feel blessed in having so many friends who had known that I was writing, showed interest in the work as it progressed and took the time to read Finding Takri.